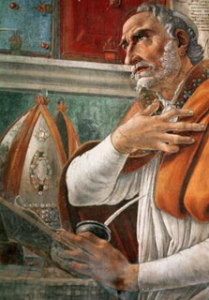 The tail is not supposed to wag the dog, however, philosophy has historically affected theology.

Augustine’s ideas about time strongly influenced Catholic, Muslim, Protestant and Jewish theologies. A thousand years of Catholic teachings in the west ingrained Augustine’s time notions into the western system. His time ideas also affected modern science, which measures a host of symbolical things with western time notions.  Many of the struggles creationists have with the age of the universe are synthetic. They were historically synthesized by blending the Bible with philosophy.

Augustine studied Plotinus before he became a Christian. Plotinus built his philosophy on Plato, who recorded his philosophy 600 years earlier. Plato’s Timaeus acknowledged  that everything is “coming to be different at different times” but a demiurge created everything and is changeless: “always is and never becomes.” Plotinus interpreted Plato’s demiurge as existing outside of time and seeing all time, since he is changeless. Augustine was following Plotinus when he claimed that God created time, is outside of time and sees all time. In Augustine’s opinion, one who does not know all future things cannot be God. The Bible never states these things.

The Biblical God is not absolutely changeless. When Nineveh repented, the predicted destruction did not happen for another hundred years. Nineveh’s repentance came from God’s grace, since He sent Jonah to preach to them. That does not mean that God reneges on His promises of salvation. He guarantees salvation to those who believe in Jesus and promises future glory for Israel. What happens when Israel is unworthy? Malachi 3:6 “For I, the LORD, do not change; therefore you, O sons of Jacob, are not consumed.”

How does God predict the future if He does not see it?

The four gospels tell the story of Peter denying the Lord three times before the rooster crowed. God did not have to see the future to predict Peter’s actions. (1) Jesus knew Peter’s temperamental character. (2) Roosters crow at first light. (3) God places limits on when and to what extent Satan can test believers (Job 1 & 2 and 1 Corinthians 10:13). (4) Luke 22:31-32. “Simon, Simon, behold, Satan has demanded permission to sift you like wheat;  but I have prayed for you, that your faith may not fail; and you, when once you have turned again, strengthen your brothers.” God does not have to see the future to make predictions and to actively bring about his plans. He has long term plans to use us “to crush Satan under our feet” (Romans 16:20) with righteous judgments.
We have a scriptural example of God predicting, planning and bring about a prophesied judgment. Ahab continued to worship Baal (the Canaanite Jupiter) even though he saw fire fall on mount Carmel when Elijah prayed. Later, Ahab and Jezebel killed Naboth for his vineyard. Elijah prophesied that the dogs would lick his blood, eat Jezebel and all his male children would be swept away. When Ahab humbled himself, God allowed that his sons would not be wiped out during his lifetime. 1 Kings 22 tells us how God planed and executed one of those predictions. The prophet Micaiah said he saw the Lord sitting on His throne with the hosts of heaven before him. God asks, who will entice Ahab so that he will fall at Ramoth-gilead? A lying spirit (a demon) said He would entice him through his prophets. The demon used the false prophets of Baal to deceive Ahab so that he died in battle and the dogs licked his blood as predicted. His preference for Baal killed him, even though the truthful God warned him through Micaiah that his prophets were deceiving him. These are not the actions of One who passively sees the future. He actively and with justice arranged that Ahab would die by the deceptions  of demons, which he continued to prefer to God. (Worshiping the pagan gods is serving demons 1 Corinthians 10:20).

How then did God predict through David and Isaiah the manner of Christ’s death? Jesus did many miracles in the temple, healing the blind and lame. He exposed the temple market as “a den of thieves.” He publicly labeled the Jewish leaders as hypocrites, a brood of vipers, sons of hell, blind guides and whitewashed tombs. It is understandable that the Jewish leaders hated him for His truthful exposures. Acts 2:22-23 “Men of Israel, listen to these words: Jesus the Nazarene, a man attested to you by God with miracles and wonders and signs which God performed through Him in your midst, just as you yourselves know– this Man, delivered by the predetermined plan and foreknowledge of God, you nailed to a cross by the hands of godless men and put Him to death.” God had a plan from long ago that Jesus would die on a cross in Jerusalem for our sins. Jesus was proactive in bringing about the predetermined plan. At the same time, the Jewish leaders actively sought to kill him because he claimed to be the Christ and exposed their wickedness. A God who actively and justly brings about his predictions, even as men willfully chose to act, is not just passively predicting the future. He is sovereign and just, yet He does not trick the wicked. He never tempts anyone to sin (James 1:13).

Jesus prayed all night before selecting the twelve disciples, including Judas Iscariot (Luke 6:12 – 16). He chose them knowing that one was a devil (John 6:70 – 71). Judas was a habitual thief and carried the money bag (John 12:6). Jesus knew who did not believe and who would betray him (John 6:64-65). God did not trick Judas into doing what was predicted hundreds of years before. He chose a man who continued to sin even as he witnessed thousands of Jesus’ miracles. Judas is the son of perdition since he knew more about Jesus ministry than any of us, yet he continued his thefts so that Satan ended up controlling him. On the night He was betrayed Jesus said that the scriptures must be fulfilled that he would be numbered with the transgressors (unlawful) and they needed a sword. The disciples said they had two swords. That is enough! God is active in bringing about predictions, yet without tempting or tricking anyone.

It is not necessary to add philosophy to the simple statements of the Bible by imagining that God created time, is not in time and sees the future. The Bible never states those things. He has plans for the future and actively brings about His plans – with perfect judgments and grace to the undeserving whom He chooses.

The picture of Augustine in his study was painted by Sandro Botticelli in 1480. There is no record of bishops wearing miters before the medieval age.