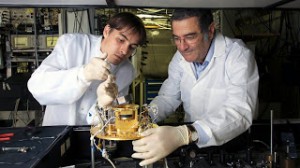 The Nobel prize for physics in 2012 was shared between Serge Haroche from Paris and David Wineland from NIST in Colorado. Both men conducted experiments trying to understand the matter – light dance.

According to Genesis, God created the plural heavens (evidently the galaxies) and the Earth first before He began to form the Sun, Moon and stars.  At the earliest stage, the Earth was unformed although its surface is mentioned. Evidently it had limited extension. Then Elohim’s wind dithered over the formless, dark place and He continued to command light to continue to be. Perhaps that is when the Earth began to have extension. Indeed, experiments show that light flutters back and forth within all matter. When scientists bombard atoms, they find that they are 10,000 times more empty space than reacting entities. Evidently it is light that give matter its ability to have extension and its chemical and nuclear properties.

Dr. Wineland trapped beryllium ions in an electric field and then slowed them (cooled them) between opposing laser beams. The “electrons” oscillated back and forth between ionized states as observed by their light transmissions. Beryllium ions emit visible light instead of microwaves as in cesium atomic clocks.

Dr. Haroche got photons to bounce around in a highly polished mirrored cavity for a tenth of a second before being absorbed. While the photons were bouncing, he injected an atom into the cavity that interacted with the oscillating photons. Some photons seemingly existed in two states, or two places, out of phase with themselves so that they seemed to move in both directions at once. Dr. Haroche explained this using the Schrodinger paradox as if the cat in the box is both alive and dead at the same time.

We don’t just see things because of light but the things we see are themselves a relation with light (phos estin Ephesians 5:13). Light never stops dithering around within matter. In fact, the Bible mentions “the house of light” that has a border. The paths of light within this ancient house are mysterious, the place where darkness dwells Job 38:19-21. When the Creator describes the house of light,  he is describing what we today call an atom.

Things that interact relationally can be interpreted in two ways. If the experimenter builds an apparatus that expects things to have physical properties, then he detects physical particles. If he constructs an apparatus looking for interactions, then he will find interrelated wave-like properties. If he changes his apparatus after matter has passed a one way event (a beam splitter) the properties shift with the instruments as though they could exist in both “states” at once> the experimenter seems to determine the result of his experiments by what he does. The dual nature of matter light and its non locality are not so mysterious is one accepts that light and matter are intimately related, that is relationally connected, rather than merely particles.

We see the creation of the universe exactly as described in the Bible. He did not begin to form the Sun, Moon and stars and continue to place them in the spreading place until half way through the creation week. In billions of galaxies at many ranges, we observe how matter continues to take form, spreading out as streams of star globs emerge from formerly naked galactic cores. The earliest galaxies shone at tiny fractions of the frequencies of modern atoms. Billions of galaxies intrinsically grew into huge, local, dusty, growth spirals.

Of course, what is visible is a violation of the creed of all scientists, the “first law” the Bible predicted for the last days – the notion that all things that exist remain the same. Scientists define matter as that which does not intrinsically change. Then they use this assumption to invent operational definitions, such as clocks measure time or both sides of a balance scale are not changing together. The visible history of how galaxies grew from unformed-matter origins, casts serious doubt on the historical, metaphysical assumption that is at the heart of empirical science.

What we observe in the universe is relational changes. Matter is a relation with light. It is not particles. No one has ever discovered a subatomic “particle” that, when shattered, does not exhibit light like properties.