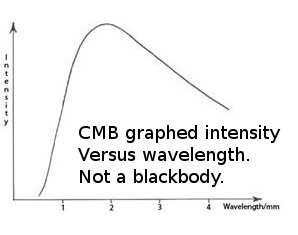 Physicists often explain that the Big Bang is authenticated by  the Cosmic Microwave Background (CMB): a faint hissing in the microwave band that comes from all directions in the sky.

The distant universe also shines in faint infrared, called the Cosmic Infrared Background (CIB). The Balloon-Borne Large Aperture Sub-millimeter Telescope (BLAST) detected infrared objects during an eleven-day Antarctica flight. Later the Spitzer Space Telescope examined the same field in the near-infrared and found discrete galaxies and galaxy clusters. Astronomers then re-examine the field in the far-infrared and the two images showed the same galaxies. The Cosmic Infrared Background evidently emanates from ancient galaxies that gleamed in infrared. The CIB is not an echo from a Big Bang.

Despite the correlation of the other background radiations with discrete galaxies and galaxy clusters, many astronomers continue to site the CMB as an echo from the Big Bang.

They plot the intensity of the CMB on a graph with its peak intensity in the infrared at a wavelength of 2.1 millimeters. Astronomers claim the graph shows a black-body radiation curve that corresponds to a temperature of 2.725 degrees Kelvin. Local black-bodies emit light whose peak wavelength correlates with the temperature of the object. For example, the Sun shines at a peak intensity of 550 nanometer wavelength that corresponds to a surface temperature of 5,778 degrees Kelvin. The much cooler Earth has a shallow black body radiation curve with a peak wavelength of about a hundredth of a millimeter. Does that mean that astronomers think the big bang was cold? No, they imagine that the vacuum of space time stretches itself, dragging all passing light to longer wavelengths. No experiment has ever detected light changing frequency as it passed through a vacuum.

Most black-body curves are plotted intensity versus wavelengths. However, when it comes to the CMB, scientists plot it as intensity versus waves per centimeter or they use a logarithmic wavelength scale. By using nonlinear scaling, the data is made to look like a textbook black-body. If the CMB were plotted it in the normal fashion, it does not look like textbook black-bodies. The above graph shows what the CMB would look like if it were plotted with linear scales. Evidently scientists are tricking us into believing the CMB is an echo of the Big Bang by adjusting the scale of their graphs to make it look like something it is not.

The CMB, CIB and CRB are evidence that ancient matter shone at much lower frequencies than modern matter. I predict that the CMB actually comes from a wallpaper of trillions of ancient galaxies whose atoms emitted microwave light.

Why would scientists obfuscate the data? The Bible predicted that in the last days, mockers will come saying “all things remain the same.” Peter predicted that they would obfuscate (Greek lanthano) that the plural heavens were out-old (Greek ekpalai). The Greek verb lanthano means to hide, to continually make secret, to deliberately refuse to know something. Scientists obfuscate because they believe that the properties of matter are fixed, not continually emerging. This is why scientists cannot accept galactic history. They obfuscate the data because of their idea that the properties of atoms are fixed. Indeed, the historical first principle of western science is this very idea, that the essence of substance is changeless.  This idea was invented by medieval Catholic scholastics who came to believe that matter has intrinsically fixed properties because in their view the Creator was not in time: unchangeable. Scientists define their ideas about time, energy and mass with the notion that atoms are immutable and dither with perpetual motion. They calibrate their measuring units with atomic clocks that allegedly are always clocking the same rates. Yet local atomic clocks when compared to their transponded reflections through four distant spacecraft, were also observed to accelerate. This acceleration is known as the Pioneer Anomaly. It correlated with distance and follows the same atomic clock  acceleration (relative to distance) that we observe in billions of ancient galaxies.
Even scientific empiricism, constants, methods and mathematical methods rely on the notion that matter is not changing relationally with age.
We see the light from the past in billions of ancient galaxies. Not a single galaxy shines with the frequencies of local atoms and the differences often correlate with dimness and compact galactic morphologies. The simple, visible evidence suggests that atoms are always changing themselves relationally. If atoms change relationally, the space matter takes up, its atomic frequencies and its inertial properties all shift together. Relational changes cannot be precisely measured because scientific definitions, measuring units and instruments depend on the notion that the essence of all substance is changeless. Yet we can directly compare the past with the present in the distant sky. No perpetual motion atoms gleam from any ancient galaxies.

Indeed we observe how galaxies grew from tiny naked cores as strings of equally spaced star globs accelerated outwards. The cores of primordial spiral galaxies often shine at different spectral wavelengths than the emerging arms. Billions of galaxies grew from tiny globs of primordial formless matter as the stars came out and accelerated out, exactly as the text of the Bible suggests. Even the earth’s continents only fit together on a tiny globe, without major seas, just as one should expect from several biblical passages (e.g. Isaiah 42:5) Indeed, the biblical God claims He is the one who is spreading out the plural heavens (the galaxies) and calling the stars to come out in unbroken continuity (Isaiah 40:26). He is not stretching out the vacuum of space time, but matter itself as it continually changes – galaxies growing into huge, local, dusty, growth spirals as streams of star globs continue to come out from the unformed matter in the core. The atomic clocks accelerated as the matter continued to take up more space and the stars moved outwards, in defiance of every law of physics. The CMB, CIB and CRB are simple, visible evidence that ancient atoms were tiny and shone at tiny fractions of the light frequencies of modern atoms.

There is not a shred of evidence for the Big Bang that was not contrived from the scientific assumption that atoms are perpetual motion engines.

He commands you to lift up your eyes and look at the heavens that display His glory (Isaiah 40:26). What glory the biblical God will get when He makes foolish the wisdom of this age! He even warns us not to be wise in this age because we will deceive ourselves – since He is taking the wise with their own skills.

Carefully examine the first principle of science. Test it by observing the only history that is visible as it happened, galactic history.