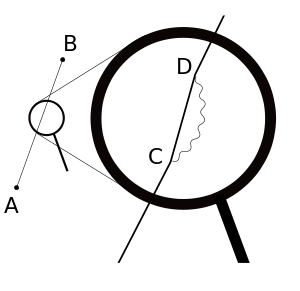 The theory that smells come from shapes has a long history. Two thousand four hundred years ago, Democritus noticed that we smell baking bread, but we don’t see what is affecting our nose. He proposed tiny indivisible things (atomos) that have different shapes and our nose detects the shapes of the indivisible.
Deuterium is hydrogen with a heavy nucleus. It has the same chemical properties as hydrogen. The acetophenone molecule becomes heavier when it is formed with deuterium. Leslie Vosshall did a test in 2004 in which subjects tried to distinguish by smell the lighter and heavier versions of acetphenone. They could not smell the differences. This suggested that Democritus was right, perhaps we smell different things because of shape.

A new experiment done by Turnin used a heavier molecule – cyclopentadecanone. This molecule has more hydrogen bonds and so deuterium versions of this molecule are more active. The subjects in a double blind test were able to distinguish between lighter and heavier cyclopentadeconone that are supposedly chemically the same. This suggested, to the experimenters, that our olfactory sense is triggered by the vibrations of a molecule, not its shape. A smell receptor in our nose perhaps gets a boost from a molecule with just the right vibrations.

Understanding the nature of matter is critical to our world view.
Scientists are unable to demonstrate without contradiction what matter is – so they say it has dual properties. Quantum experiments sometimes find electrons that demonstrate interference and diffraction, wavelike properties. Other experiments show compact bits that suggest momentum (e.g. the photoelectric effect). Some experiments show that matter has non local properties. “Particles” split off from a reaction can statistically affect each other even though separated by kilometers. Other experiments can switch between “particle-like” properties and wavelike properties even after the test object has passed a beam splitter (a decision point).

The Bible has simple statements that help us understand the rudiments of things otherwise too complex to understand. The first things God created (completed action verb) were the plural heavens and the Earth. However, the Earth at that stage was formless, although its surface (paniym) is mentioned twice. Then Elohim’s wind dithered intensely in unbroken continuity over the dark, primordial place (tehom). The verb rachaph is only used two other places in Scripture. It is used for the hovering of an eagle over her young (Deut. 32:11) and for the trembling of bones (Jer. 23:9). We know that God is spirit and the Earth is material, things that He brought into existence by repeated commands, not by physical shaking. The dithering in unbroken continuity is associated with the continuing commands for light to continue to be. On the next day we find that the Earth is no longer formless, but covered with water and God continues to command water to separate by a spreading (raqiya) atmosphere (shamayim). Day One suggests that the earth, and by implication the galaxies, began to have extension as light continued to dither around within matter.

We know from Job 38:19 – 21 that light continues to abide or reside (shakan) somewhere. We learn that light’s residence is a standing place, a station of darkness.  We learn that light has a territory or border (gebuwl) and that light has paths (nathiyb) in its house (bayith).
QED experiments show that light has an affinity with matter and that it dithers around continually within its house, the atom. The house of light is the simplest and most accurate description of an atom. The apostle Paul tells us to walk as children of light, in Ephesians 5:8 – 13. We are not to have fellowship with the works of darkness, but rather reprove them. In verse 13, Paul widens the effect of light by extending the discussion to all things, ta de panta. All things are passively reproved (elegchomena) and passively exposed (phaneroutai) by photos. He then explains why all things are made manifest by light because all things (pas) continue to be light (phos estin). All things are not particles or energy or mass. All things continue to be (Greek present indicative) light. Light gives form to matter. Light really does expose error and illuminate the truth. All objects, even the smallest things, are related to light that dithers around within all substances, as one should expect from the Hebrew text for Creation day One.
To understand that matter is light is to have a simple grasp of things too complicated to determine by experiments alone. God made a relation with light, which is why the Earth continues to have extension. This relation is changing as the Bible so plainly states, that the creation is enslaved to change (Romans 8:21). Science was founded on a contrary principle, which is predicted in the Bible for the last days, that all things remain the same (2 Peter 3:4).

This is certainly why scientists reject the simple evidence that the Earth was once a much smaller body.  The Bible says three times that the earth spreads out in unbroken continuity. Indeed the continents fit together, without major surface seas, on a tiny globe and the sea floors are younger than the continents.

Is smell an interaction as light emerges from its house to trigger a response in a smell receptor that is also activated by internal dithering light? These things are too complex to decode. However, understanding that matter is a relation with light is important for understanding cosmic history.

We see the history of the universe back to the creation era. The earliest matter clocks less than 10% of the frequencies emitted by modern atoms. The earliest matter is also compressed, seen in tiny naked galaxies without starry extensions. We observe how light clocks continue to accelerate as billions of galaxies grew from tiny naked globs into huge, local, growth spirals. The Creator commands us to lift up our eyes and observe how He continues to spread out the plural heavens in unbroken continuity. Look!

The picture is a Feynman diagram of the interaction of light with “electrons.” One way to interpret QED interactions is that an “electron” emits a photon which moves to another location and turns back into an “electron”, thus allowing the “electron” to move. The Stanford linear accelerator collided beams of light and produced “electrons.” Electrons and positrons can collide and disappear in a flash of light.  This Feynman diagram is under the Creative Commons Attribution-Share Alike 3.0 Unported by wikipedia user Dylan1946.