The Bible does not directly state either death or no death, so we can only speculate using the statements it does make and the evidence we see that has survived from the ancient world.

Adam was authorized to eat of every herb and tree that bore seeds. God also gave every green herb for for food to all the animals the moved on the land or that flew in the air. This suggests that air breathing animals ate green plants and may have continued to do so until the cataclysm. No mention is made of creatures that live and move in the water. Did marine animals consume each other before Adam sinned? 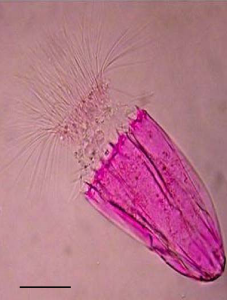 Bacteria reproduce after their kinds are an important part of the digestion of all animals and regularly die as they preform their function. They are not walking about, so nothing is said of them. Oil is evidence that sulfur eating bacteria live and die in deep aquiferous environments. Researchers who examine sub-seafloor drill cores have discovered tiny egg laying creatures whose metabolism is based on sulfur or hydrogen without the need for oxygen. This picture of such a creature, spinoloricus, is licensed under the Creative Commons 2.0 generic license by Roberto Danovaro et al from wikipedia.

Did fishes eat each other before sin? I know of no way to answer that question from scripture. There are thick layers of limestone and chalk in many areas of the continents. These are evidence that countless generations of sea creature (that in evidently lived in the underground seas -the tehom) died and their bodies were gradually accumulated. We have no way to prove that this happened only after Adam sinned.

(Romans 5:12-14) Therefore, just as through one man sin entered into the world, and death through sin, and so death spread to all men, because all sinned– for until the Law sin was in the world, but sin is not imputed when there is no law. Nevertheless death reigned from Adam until Moses, even over those who had not sinned in the likeness of the offense of Adam, who is a type of Him who was to come.

This verse does not mention animal death. It is about the judgment of humans, which is inherited by all mankind. Even those who did not break the law died. The law was not written until Moses. Notice that Adam is a type of Jesus who was baptized by John, identifying himself with us sinful humans (yet he was without sin). He died and was raised again to defeat Satan, death and sin.

(Hebrews 2:14) Therefore, since the children share in flesh and blood, He Himself likewise also partook of the same, that through death He might render powerless him who had the power of death, that is, the devil,

Notice who has the power of death. A believer should never blame God for death. He is the giver of life. Satan is the deceiver who actualized death for sinful humans.

In Genesis 2:17 God told Adam that he could eat of any tree of the garden, except from the tree of the knowledge of good and evil, for on the day you eat of it you will surely die. In Hebrew it says on that day – dying continue to die (repeated die word in infinitive and imperfect form). Wait, you say, death is an event. You cannot continue to die. In a language without verb tenses or a concept of time, like biblical Hebrew, you can continue to die. On that day Adam became mortal. Many Christians spiritualize this verse claiming that they died spiritually on that day. That may be, but the grammar of the text shows how they were to continue to die beginning on that day. For most old people, death is a process, not an event. Adam lived 930 years before his continuing mortality culminated in the death event. 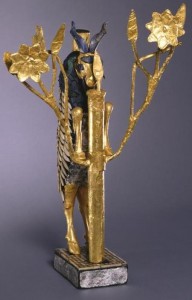 This tree will grow on both sides of a river in the New Jerusalem (Revelations 22:1-2). Its leaves will be for the healing of the nations. It must be en enormous extended tree to preserve life for the nations. This tree has twelve kinds of fruit, one kind for each month. Yet in the New Jerusalem there is no nigh, no Sun and no Moon. Perhaps the tree is itself the marker for the eon lives that people will live in that era.

The Hebrew text for the curse is passive. God did not create the degeneration of all animals nor did He create thorns and thistles. They naturally came about because of the passive curse. He is not the one who kills us or the one who actively goes about ruining the creation. Sin and Satan ruined it. He does change animals so that they can continue to exist in a changing world as He claims to do in Job 38 – 39.

In Romans 8:21, Paul used a future PASSIVE indicative verb for the restoration of creation. Evidently the day when lions will again eat grass like an ox will come about passively, not instantaneously, during the millennium.

Latin traditions are the enemy of biblical Creation. Only the literal text is supported by the visible creation of the universe which we can see (with telescopes) as it happened long ago. Someone might claim, the universe is young – only six thousand years old. I agree it is 6,000 years old but it is certainly not young. We can see throughout cosmic history how the atomic clocks and the orbits both continue to accelerate together as billions of galaxies grew into huge growth spirals.

The western concept of time, which is an integral part of scientific, mathematical reasoning, is visibly false. We confirm the literal Genesis account and the several passages where God claims to continually (in unbroken continuity) spread out the plural heavens in the visible history of how galaxies formed.