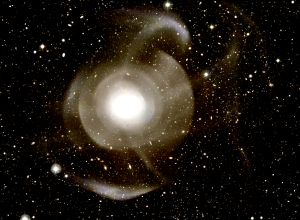 Moses’ language did not include past, present or future verbs. He did not have the tools for thinking of time like westerners. Modern translators usually follow Latin traditions that adapt the text to Western tensed languages and time notions.  For example, most translations record: “God said let their be light,” as though He said it only once. In Hebrew, the verbs show continuing or repeated actions. In Hebrew, He continued to command light to continue to be. Even when it says He finished the creation, the Hebrew words show repetition. The text for day seven shows that the intensity of creating the heavens and the earth finished, but the finishing evidently continues because it uses imperfect verbs). That make no sense in a language that references all actions to time.

Once we stop interpreting the text with the western concept of time, the creation is visible exactly as in the grammatical Hebrew account. With telescopes, we can see the creation as it occurred, since the universe is so vast that we can see the past at many ranges. We confirm that the stars continued to form (imperfect verb) and continued to become things that spread (raqia), as in the Hebrew for day four.

Let’s examine the Hebrew of day one.

First Elohim (the plural God who uses singular grammar) created (completed action) the heavens and the earth. The first word (often translated “in the beginning” means  chief, head, that which is first. Moses makes no mention of the beginning of time. Indeed, Genesis one does not mention time, only days, evenings and morning. First God completed creating everything in the material universe: the heavens and Earth: an all inclusive phrase.

Verse two shifts our focus to the Earth, that was created along with the plural heavens. It starts with the waw character – that functions as an and, then or but. But the earth was tohu wa bohu and the face (paniym) of the abyss (tehom) was dark. The word for face suggests that the primordial Earth had a surface. The unformed and void words (tohu wa bohu) and  the abyss word (tehom) suggest that the Earth had limited extension.

Then Elohim’s wind, in unbroken continuity, dithered over the face of the primordial place. I use the word dither because the Hebrew word means to flutter. For example, in Deuteronomy 32:11 an eagle “hovers” over its young. Eagles shake their winks back and forth as they extend them over their nestlings. The only other time the vibrating word (mrchphth) is used in Scripture is in Jeremiah 23:9. The prophet speaks of his bones “shaking” from distress. Why would Elohim’s wind continue, in unbroken continuity, to vibrate? Perhaps the shaking action is associated with giving form to what was dark and unformed. As Elohim’s wind continues to dither, the text no longer refers to it as a abyss, but as waters (mayim) which can mean a transitory thing. Did the shaking action have anything to do with the birth of the waters? Job 38:8-9 mentions the birth of the sea.  “Or who enclosed the sea with doors when, bursting forth, it went out from the womb; when I made a cloud its garment and thick darkness its swaddling band.”

In verse three (3), Elohim continues to command light to continue to be and the light continues to become. Is the unbroken dithering action associated with the continuing commands for light to be? Experiments show that light never ceases to dither around within all substances. This suggests that the light referred to in this verse is internal to matter and the dithering action is associated with how light gave form to the formless earth.

In verse four (4), God continues to see that the light is good and continues to divide it from darkness. The continual dividing of light from darkness suggests that Elohim is dividing internal, never-ending, dithering light from the external world, where darkness is an absence of light. Light remains internal to matter unless it responds to an external light-trigger. When atoms shatter, as in an atomic bomb, a blinding light spreads out with great intensity.

Atoms are filled with dithering light that continually moves at the fastest speed. As light moves within its house, it only leaks out to impinge on our sight when the house of light changes the dimensions of its perimeter (interacts with external light) . This internal light gives matter its ability to have extension and other properties. Experiments that shatter subatomic entities, find light-like things all the way down. In Isaiah 45:7, the Lord continues, in unbroken continuity, to form light and create darkness.

All that God made, formed and organized on subsequent days depends on the foundational things created on this first day: the  matter of the heavens and the earth.

The fifth verse tells us that God continued to call the light day and completed calling the darkness night. The distinction between “continually calling of light ” and “completed calling of darkness ” suggests that here He is naming the light that repeatedly escapes from its house. External light interacts with other houses of light (atoms), such as the sensors in our eyes. Darkness is an absence of external light. Even in the dark, light continues to dither within all matter. Understanding that matter is a relation with light (phos estin – Ephesians 5:13) is extremely useful for a simple understanding of quantum experiments.

In verse five we find two uses for the word day. And there was evening and there was morning, one day. God continues to name the “period of daylight” as day. He then numbers the evening and the morning as day one, a full day and night cycle. There are no definite articles in the Hebrew for the numbered days 1 through 5. It does not say “the” first day, but day one.

Many have wondered how there could be an evening and a morning before the Sun began to form on day four. Huge new telescopes are even now observing cosmic history at many ranges. Early spiral galaxies were often tiny and naked, without starry arms. Ancient galaxies glow at microwave and infrared, which is much slower than frequencies emitted by modern atoms. This suggests that early atoms were much smaller than modern ones. If the rotating Earth was close to the glowing heart of our galaxy on day one, before the stars began to form,  there still would have been a day and night before the Sun was shining.

We cannot use telescopes to visualize the universe before God commanded light to continue to become. However, we do observe periodic bursts of light (gamma ray bursts) arriving from the earliest universe. The bursts often come from the areas where the arms of primordial galaxies are forming. This suggests that we are observing the very things God said He continues to do, commanding light to continue to be. It is light that continues to give form to matter. It was God who energized matter by continuing to command light to be.

The picture shows emerging shells and streams of stars from the elliptical galaxy NGC 474.  How did galaxies form? They began to form on day four into spreading things, just as we observe in cosmic history.  Only the biblical creation account fits the visible history of how stars emerged from the unformed matter God created first. Image credit: P.A. Duc (CEA), CFHT) Atlas 3D Collaboration.