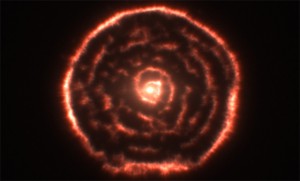 This is an image of the nearby star R Sculptoris from ALMA, the milimeter / submilimeter array .  R Sulptoris is a red  giant. ALMA visualized the signature of CO molecules spiraling outwards within a spherical envelope that surrounds the star.  The spiral starts in the center and spirals out. Pulses of matter are seen in the spiral.  Credit: Credit: ALMA (ESO/NAOJ/NRAO)

Astronomers imagine that the spiral structure is “probably caused by a hidden companion star.” Hidden companions are often invoked by astronomers to explain something that violates their assumptions.
We find spirals shapes in growing sheep horns, snail shells, water eddies and storm clouds. We call these familiar shapes: logarithmic spirals or growth spirals because they result from incrementing changes. When we compare the shapes of spiral galaxies at many ranges back to the creation era, we see that they grew that way from originally naked cores. We observe how the stars came out and spread out in billions of galaxies at many ranges. We can also compare the ancient light with the light from modern atoms in all parts of the spectrum. No ancient galaxy shines with the light frequencies of modern atoms and the differences generally correlate with distance. When we sent the Pioneers, Galileo and Ulysses (spin stabilized spaceships) far from Earth, they returned NASA’s hydrogen maser clock signals by means of a transponder. NASA atomic clocks of the moment  were running faster than when the signals left for the round trip hours ago. The clock accelerations correlated with increasing distance and with Hubble’s ratio. Astronomers use the Hubble ratio to estimate the distance to an ancient galaxy using its observed light clock rate. Evidently atomic clocks all over the universe steadily accelerate their rates, relative to yesterday’s rates.

What is visible in the universe is a biblical creation, exactly as spelled out in the Hebrew text. First Elohim created (completed action) the plural heavens (evidently the galaxies) and the Earth. However the Earth had no form or extension until Elohim’s wind dithered over the primordial surface and continued to command light to continue to be. He did not form the Sun, Moon and stars until half way through the creation week. He form them into things that spread (Hebrew raqiya). We observe in billions of galaxies how the stars continue to emerge and spread out as atomic clocks also accelerate.
Scientists have invented a cosmos that is 99% invisible to protect their first law. What law? The Bible predicts that in the last days, mockers will come obfuscating the age ekpalai – out-old) of the plural heavens with a first law (arche ktiseous) – that all things remain the same (2 Peter 3:3 – 6). Indeed, modern physics definitions, empiricism and mathematical laws were historically contrived with an assumption, that the properties of matter are fixed, not emerging.
Astronomers often speculate about the existence of invisible objects, such as invisible companion stars. Why? Growing spirals violated their laws of physics. Yet no spiral galaxy follows the laws of physics, so they imagine that donuts of invisible matter surround every galaxy. They claim that undetectable “density waves” caused the spiral lanes. They even imagine that the vacuum of space-time stretches light passing through the void. Yet the visible history of how spiral galaxies formed reveals star globs accelerating out from originally naked cores. The star streams rotate around the galaxy in the opposite direction of the proposed ‘density wave” theory. The scientific cosmos is mostly undetectable magic to protect their blind creed that the properties of matter are fixed, not continually emerging.
What we observe exactly fits the text of the Bible. We see a literal creation exactly as spelled out in Scripture. Lift up your eyes and observe galactic history and you will see how the Word of God will triumph over science.