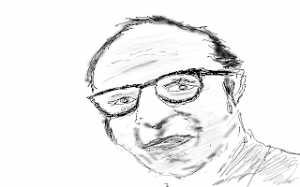 Thomas Kuhn was a physicist who became a historian of scientific upheavals. He defined normal science as what scientists do within the domain of their paradigm, their accepted way of thinking and measuring. Normal science uses metaphysical concepts, definitions, instruments and methods to extend and refine their paradigm, but not to change it. This is why scientific revolutions come from outsiders, those who are not trained in the accepted paradigm. “No natural history can be interpreted in the absence of at least some implicit body of intertwined theoretical and methodological belief that permits selection, evaluation, and criticism.” The scientific paradigm informs scientists what is a problem, what constitutes evidence, how to gather evidence and how to solve problems using the techniques and definitions supplied by their education in their paradigm. “The man who is striving to solve a problem defined by existing knowledge and technique is not just looking around. He knows what he wants to achieve, and he designs his instruments and directs his thoughts accordingly.” When practitioners of the paradigm stumble on discordant evidence they either ignore it or adjust it to fit their assumption-dependent methods and definitions.

Although the Babylonians, Greeks and Muslims had complex mathematics and astronomical techniques, these did not result in empirical science. The first principle of modern science developed in medieval Europe. The scholastics were excited by their reading of Greek and Arab philosophers but they went beyond the bounds of classical thinking.

(1) The Catholic scholastics did not think they were tailoring the Bible to fit the system of the pagan Aristotle. They thought of philosophy as the handmaiden to the Bible. They imagined that Aristotle’s system could help bring skeptics to faith.

(2) Friar Thomas, Duns Scotus and other medieval scholars did not understand that they were laying the foundation for western science. The God whose name is I AM is absolutely changeless (ipsum esse subsistens)  in Catholic theology, existing outside of time. The scholastics used the Latin verb “to be – esse” as a noun. The “essence” of God is changeless. Since He is the Creator, they came to regard created matter as also having an unchanging essence.

(3) After centuries of Catholic influence in western schools, Newton operationally defined time and matter. An operational definition can define something undetectable (like time) by alleging that it is measured with clocks. Newton built his mathematical system on the notion that the essence of substance (and clocks) are changeless. Einstein also assumed that atoms do not intrinsically change their clock frequencies throughout cosmic history. Scientific operational definitions of time and matter, scientific measuring units, conservation principles, methodologies and mathematical laws were contrived on one fundamental assumption. When scientists measure symbolical entities like mass and time, they are depending on the medieval assumption that the essence of substance is changeless.

Peter prophesied that in the last days mockers will come saying panta houtos diamenei – all things (that exist – no definite article) remain the same. 2 Peter 3:3 – 6. He used a Greek expression (arche ktiseous) to label this idea. This phrase can mean a first law. Indeed, scientists are doing the very thing Peter predicted with their first law. They obfuscate (Greek lanthano) the history of how the plural heavens (evidently the galaxies) formed. Scientists have filled the universe with magical things like invisible matter and vacuum forces to protect their historical assumption. They also reject the evidence

for earth’s geology (the continents fit together on a much smaller planet) because it conflicts with their dogmatic faith that matter is not changing itself as it ages. It is easier to believe in undetectable subduction, although the ocean trenches have layered undisturbed sediments. The Bible plainly states that the Earth spreads out in unbroken continuity and this happens above the waters. (The gif of the growing Earth is from Michael Netzer who allows distribution with attribution.  Notice that the continents fit together on a tiny globe, without major surface seas.

We observe, with telescopes, the overwhelming evidence for biblical creation. The only history that is visible as it happened is galactic history. What we see exactly fits Moses’ Hebrew verbs. What we observe does not fit either the medieval metaphysics or the traditional exegesis of the creation texts.

The plural heavens (shamayim) are declaring His glory and the spreading place (raqiya) are telling the deeds of his hands (Psalm 19:1). Simply believe the light from long ago and you may understand how great will be the triumph of the creation account over science.

The drawing of Thomas S. Kuhn was drawn by the author and is released under a Creative Commons Attribution-ShareAlike 3.0 license.